In the past couple of years, construction customers have been increasingly asking for a wheel loader that could offer “short boom,” “load and carry” or “2-pass” configuration. Now, Kawasaki-KCM Wheel Loaders has answered the call by introducing the 95Z7 and 115Z7 Xtreme wheel loaders.

Compared to their standard counterparts, tipping load for these two machines is 10% greater for the 95Z7XT and 15% greater for the 115Z7XT. Primary applications for the XTs are expected to be:

Since 1962, Kawasaki has been considered the North American leader when it comes to wheel loaders. The manufacturer says these two newest additions to the line were designed in conjunction with the Tier 4i wheel loaders introduced back in 2013. The machines have been tested extensively in North America, under varying conditions including high altitude and desert heat.

The new Z7 Xtreme wheel loaders achieved even greater fuel economy and breakout force than anticipated, but Kawasaki officials say they were most surprised by the bucket heaping ability. The 95Z7XT’s 9.0 cubic yard bucket weighed in at more than 15 tons in sand, and more than 13 tons in gravel. Testing mirrored typical real-life conditions, in which loaders handle more than one type of material during the day. Production and loud out also increased appreciably.

The new models retain many of the features of Kawasaki’s earlier models, with specific reconfiguration for the more demanding applications in which the XTs are expected to perform:

These enhancements and reinforcements are all designed to ensure the machine’s ability to handle the heavier buckets while simultaneously providing greater breakout force. In fact, breakout force is 26% greater in the 95Z7XT. For the 115Z7XT, it’s 6% greater than the standard model. 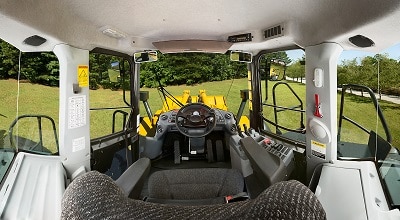 Both XT machines retain all the creature comforts for which Kawasaki wheel loaders are known, so even though the equipment is working harder operators won’t have to. They can still be comfortable and productive without undue fatigue, thanks to the deluxe, ergonomic air suspension seat with heated cushions, adjustable side console, high visibility front dash design and standard rear back-up camera as well as Kawasaki’s entire IntelliTech operating system.