One of the subjects that has received a lot of attention recently in the trucking industry is tires. They are expensive and, ultimately, consumable. The tires you choose and how you drive can dramatically affect your over-the-road fuel costs, not to mention the lifespan of the tires themselves. Now Meritor has introduced a new Tire Inflation System for tractor tires that could give your bottom line a real boost and give drivers more peace of mind, too.

When your truck is moving, the system automatically monitors tire pressure. If it detects less-than-optimum pressure, it automatically inflates the tire. If it continues to detect problems with a particular tire – frequent re-inflation needs – it alerts the driver so that he or she can personally check the tire and get it repaired. Other than providing alerts, the system operates independently of the driver. 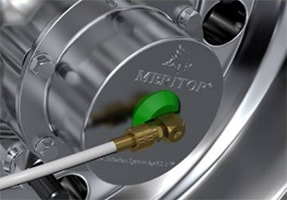 The system is comprised of two parts – an electronic control module and as many as six proprietary wheel-end seals – that work together symbiotically. “You can’t get the seals to work without the brains that control the air flow,” explains Joe ElBehairy, Meritor’s vice president of Engineering & Quality.”

He says that seals wear a little every time they are pressurized, so Meritor had to develop the logic and algorithms that could operate the system efficiently yet ensure minimal seal inflation time. Meritor also had to develop a proprietary seal. It rides on the polished surface of the axle spindle. “We run air through that seal to get it out to the wheel end,” says ElBehairy.

But he says it’s somewhat different with a trailer axle. “On a trailer, you can pressurize the axle tube and run the air through a very small ‘pin seal’ out at the wheel end. It’s very easy to make those last, whereas with a drive axle, first of all you have an axle shaft running through it, and second, you can’t pressurize it because it has oil in it.”

The Tire Inflation System should last about 500,000 miles, which ElBehairy points out is essentially the same interval you would service wheel ends. He says Meritor’s test truck has run well over 300,000 miles. The company has also enlisted help with validation testing from five customers who are operating a total of 15 fleet trucks with various generations of the new system. Some of these trucks have already run more than 50,000 miles.

Meritor plans to continue field testing through 2015, and expects the MTIS to hit the commercial market on a limited basis next year.

MTIS helps avoid blowouts through early detection and its alert system. Based on a potential to prevent two tire failures per year, Meritor says it would take just one year for the system to pay for itself.