What happens when you think holistically about making heavy duty trucks more efficient? You get the new Detroit Diesel integrated powertrain. Instead of three disparate components mechanically fitted together, the new powertrain incorporates the Detroit DD15 engine, Detroit DT12 transmission and Detroit axles, all in one  package that uses sensors and electronic controls to operate efficiently.

The design team at Detroit essentially started from scratch, with the goal of developing a single, integrated powertrain. Because all the components were Detroit products, they were able to use shared engineering and manufacturing facilities and a “dream team” of engineers that focused on the powertrain as a whole. They came up with a system that offers outstanding engine and driveline performance and greater fuel economy, resulting in lower total cost of ownership.

The new powertrain will be available for the Freightliner Cascadia Evolution as of January. A few months later, it will also be available as part of the new Western Star 5700.

What’s the big deal about an integrated powertrain?

According to Daimler Trucks North America (DTNA), you’ll get more uptime with greater safety and efficiency, thanks to a new axle ratio and configuration that matches the new engine rating and re-calibrated transmission electronics that provide seamless integrated performance. 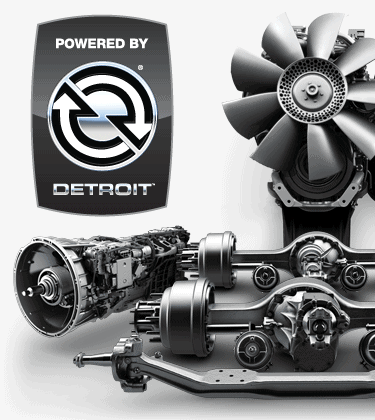 The Detroit DD15 engine has a new downsped rating of 400 hp and 1750 lb/ft. It generates power and torque earlier, so it can run at lower RPM at any speed. That makes the engine more powerful at low RPMs. You still get the top performance you expect from a Detroit engine, but you also get better fuel economy and less wear and tear.

The DT12 now has Intelligent Powertrain Management (IPM) technology. You can pre-load terrain maps for your routes, enabling the GPS to “see” the upcoming route and automatically adjust engine and transmission functions. You get a smoother ride.

The DT12 has another unique technology called eCoast, which provides two benefits – the engine can operate at idle of 500 RPM when engine power isn’t required to move your truck forward (based on inputs from drivers or road conditions), and “creep mode” that boosts low-speed maneuverability.

Brad Williamson, DTNA’s manager of engine and component marketing, explains it this way: “Whether approaching a grade, cresting a hill or traveling along rolling hills, Intelligent Powertrain Management makes sure the truck is carrying the most efficient momentum into the road ahead.” He says the DT12 is the “critical link between the engine and axles,” and the IPM facilitates seamless communication that improves performance and saves fuel.

The newly designed powertrain comes with a 6×2 configuration that has a 2.28 ratio specifically designed for the downsped engine rating. That’s the fastest ratio available for Freightliner and Western Star trucks, yet you won’t sacrifice performance. The 6×2 configuration includes a non-driven tag axle on the tandem, which lowers overall weight by nearly 400 pounds.

Or you can also choose a 6×4 axle configuration, newly designed with a 2.41 ratio for conditions where you need extra traction. In both options, the steer axles use low-friction bearings to give you the greatest maneuverability with least maintenance.