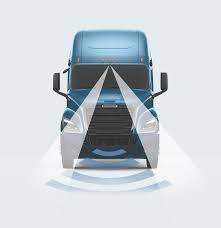 Long famous for offering the latest in innovation, Freightliner Trucks for 2015 are now available with the new Detroit Assurance Integrated Safety System. While safety has always been a concern for Freightliner and its parent company, Daimler Trucks North America, there has been an even greater push industry-wide in the last couple of years to improve truck and driver safety.

Detroit Assurance is a proprietary suite of safety systems which you can choose when spec’ing either the Cascadia or Cascadia Evolution equipped with a Detroit engine and DT12 transmission. The system is designed to protect your bottom line as well as people and property. “If we can mitigate a collision and [reduce accident] severity, we could save you a good chunk of money,” says Brand Williamson, Daimler’s manager of engine and component marketing. Safety, he says, contributes to real cost of ownership.

Driver-friendly controls are seamlessly integrated with engine and transmission electronics and dashboard visibility, which means you get smoother, more accurate transitions. The system senses the truck’s position and movement and uses radar and cameras mounted on the cab.

The radar system provides collision mitigation in addition to adaptive cruise control. It can “see” up to 40 objects as far as 660 feet away, recalculating 200 times per second.

The ABA works by detecting objects, calculating the truck’s speed and determining if action is necessary, based on a three-step process:

Daimler is quick to point out that all this new technology is designed to help drivers, not eliminate them. “It’s not doing it for you,” Brad Williamson emphasizes. “It will at some point if the driver doesn’t act, but the system is designed to get the driver’s attention to react.”

Along that same line, the Adaptive Cruise Control is also integrated with the ABA system. It can detect when another vehicle pulls in front of you at a slower speed and, if necessary, slow the truck to resume safe distance. The factory-set parameter for this is 3.5 seconds behind the vehicle in front.

You can also opt for lane departure alerts, via a camera system that uses both video and audio indicators to alert drivers if they inadvertently leave their lane. This is a separate system only available with the radar system. It kicks in when your truck is traveling faster than 37 mph. It works by using a forward-facing camera that detects reflective paint and raised reflectors in the road to identify your lane, so it may not activate if the road is covered with snow or lines have worn away.

When you’re traveling on a windy road or through a construction area, your driver can disable the system for 15 minutes at a time using a switch on the instrument panel.

Williamson says the Detroit Assurance Integrated Safety System is far superior to after-market products because it’s entirely proprietary. He says that means you’ll not only get greater safety, you’ll get greater fuel efficiency.