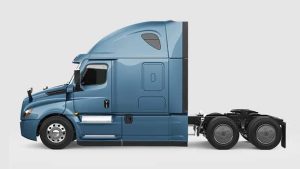 With more vehicles traveling the nation’s roadways and trucking expected to grow significantly in the coming years, manufacturers and truck owners are increasingly concerned about safety. Aside from the obvious personal reasons to keep drivers and the public safe, increased truck safety leads to increased productivity and lower costs for fuel, repairs and the downtime associated with repairs.

Toward that end, Daimler Trucks North America has introduced a proprietary suite of safety systems it calls Detroit Assurance. The systems are designed to reduce incidence and severity of collisions and will be available on 2016 Freightliner Cascadia and Cascadia Evolution model trucks equipped with Detroit engines and DT12 and Eaton manual transmissions.

The system is seamlessly integrates the Freightliner Cascadia’s engine and transmission electronics with the dashboard and driver-friendly controls, producing more accurate and smoother transitions, according to Daimler.

There are two parts to Detroit Assurance.

The base system uses radar.

It is designed to avoid or reduce the severity of accidents, using always-on active braking assist (ABA). Based on the truck’s speed and position relative to other vehicles, when the system detects an object ahead of the truck that is too close, it instantly warns the driver in a three-part process:

If the situation warrants, the three-stage sequence can activate over a period of several seconds or almost instantly.

The base radar system also features adaptive cruise control (ACC) that works with the ABA to automatically adjust the truck’s travel speed to maintain a safe following distance. The purpose of this feature is to enable trucks to travel longer distances under cruise control, which greatly improves fuel economy.

The optional add-on uses a camera.

The Detroit Assurance system can also include Lane Departure Warning (LDW) technology. This is an independent system available only in conjunction with the base radar system. When the truck is traveling faster than 37 mph, a front-facing camera is activated to detect reflective paint or raised reflectors in road lines and warn the driver if the truck crosses the line. Where roads are very windy, or in construction zones where lanes are rerouted, the driver can manually disengage the system for 15 minutes or until the truck resumes a speed of 48 mph. The downside to the system is that it cannot always “see” lane stripes that are worn or covered with snow or dirt.

Brad Williamson, DTNA’s manager of Powertrain Marketing, says all the software, logic and algorithms within the Detroit Assurance system are entirely proprietary, enabling the system to deliver better performance than a third-party aftermarket system. The radar can track as many as 40 objects up to 660 feet away, and the Video Radar Decision Unit refreshes calculations of speed, distance and time 220 times per second.

Williamson says it’s the combination of two systems working together that allows Detroit Assurance to boost driver convenience and safety while reducing fuel usage through better use of cruise control.

Explore What The Cascadia Has To Offer
Compare