SYRACUSE, New York – Tracey Road Equipment has been named one of 14 dealers across the country to represent the Hitachi Excavators line from the newly-formed Hitachi Construction Machinery Americas. In 2021 Hitachi ended a 30-year joint venture with John Deere to manufacture and sell excavators in the Western Hemisphere. Only two dealerships in New York State have been chosen to offer the Hitachi Excavators line in North America. The other dealer is All Island Equipment, which services the Long Island/NYC area.

“This is big news for us,” said Jerry Tracey, President/CEO. “We are honored to be chosen as one of only a few dealers in the country to represent Hitachi under their new corporate name and configuration, and we are looking forward to continuing our long-time working relationship with Hitachi.” 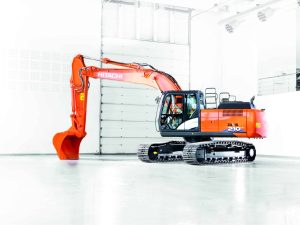 Hitachi Construction Machinery Americas officially launched its new name and brand on March 1, 2022. The company will continue to sell and distribute excavators in North and South America using newly-designated dealerships such as Tracey Road Equipment. However, machines will be designed and built-in Japan, then imported to the U.S. Hitachi has sold its interest in jointly-owned manufacturing facilities in Canada and Brazil to John Deere but will continue to provide John Deere with excavator assembly kits.

Hitachi Construction Machinery Americas also plans to add personnel at its regional headquarters to support their newly-designated dealer network and to build a new 400,000 square foot distribution center. The location for that has not yet been determined.

According to Hitachi Construction Machinery Americas Inc. CEO Alan Quinn, building the machines in Japan will be more cost-effective and make it easier to ensure standardization among products. Both factors are benefits for Hitachi and its dealerships in today’s increasingly competitive marketplace, he says. In addition, the company plans to work more closely with dealers in the rental and used equipment markets.

“One of the things Tracey Road Equipment and Hitachi have always had in common is our focus on looking out for our customers,” said Scott Collins of Tracey Road. “We are excited that Hitachi plans to incorporate all of the innovative technologies and other features for which they are world-famous into the new excavators we can offer our customers.”