Daimler Tests New Technology As They Advance Towards Autonomous Trucks

Daimler Tests New Technology As They Advance Towards Autonomous Trucks

No doubt you’ve been following the amazing story of Daimler’s development of autonomous trucks. At the end of September, Daimler Trucks put their latest-version trucks to another test, this time on a real highway, under real-life driving conditions. They say their Mercedes-Benz Actros is the first series-production truck to advance to this level of testing.

Equipped with something appropriately called Highway Pilot, the Actros is able to “see” and evaluate the entire area in front of the vehicle. Data is continuously gathered from multiple sensors, then instantly evaluated by the truck’s intelligence system. The goal is both driver assistance and greater safety.

Wolfgang Bernhard, the Daimler AG board member who oversees trucks and buses, described the on-highway test as “a further important step towards the market maturity of autonomously driving trucks – and towards the safe, sustainable road freight transport of the future.” 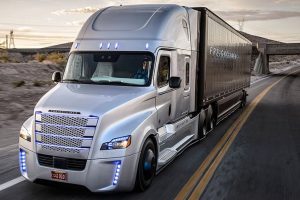 Bernhard himself served as part-time driver of the Actros. During the demonstration:

The ultimate goal of autonomous driving trucks is not to eliminate human drivers, but to free them up to work on a tablet or perform other activities independent of the truck’s operation. Since fully autonomous technology does not yet exist, Bernhard continued to monitor the Actros during the demonstration as well as enjoying his surroundings.

Daimler and others working on autonomous truck development are quick to note that some driving conditions are too complex to safely take drivers completely out of the picture. But in urban stop-and-go situations and long stretches of highway driving, the ability to switch Highway Pilot on and off will give drivers a huge boost when it comes to relieving the tension and fatigue they often face. And drivers will always have the ability to take back control instantly if necessary

Daimler’s Highway Pilot uses visual data under normal driving conditions. But when the weather is bad enough to occlude visibility or road markings are missing, the system cannot operate properly. When this happen, the system notifies the driver to take over, using both sound and visual alerts. If the driver doesn’t respond, the truck slows and then stops as soon as possible.

What’s next for Daimler’s truck project?

In July 2014, Mercedes-Benz demonstrated the Future Truck 2025 on a closed highway in Germany. This past spring, Daimler introduced its Freightliner Inspiration Truck in Las Vegas, with a partly-automated demonstration on a public roadway. Interestingly, different concept trucks have differing capabilities.

Daimler continues to work on “automation level 2” vehicles that will always require drivers to monitor truck operation (such as the Actros) as well as level 3 vehicles like the Future Truck 2025, which will allow drivers to work independently without monitoring the truck’s operation.