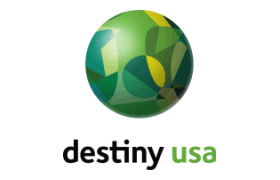 Earlier this month, Syracuse’s largest mall, formerly known as Carousel Mall, was re-named “Destiny USA.”  But there’s more to the enormous 2.4 million-square foot mega-mall, which rests on the shore of Onondaga Lake, than just its new name; its renovations, additions, and overall new “green,” eco-friendly theme – all made possible by local construction crews and their hard work – helped to completely re-brand the mall that was originally built in 1987.

Destiny USA,which first went under construction in March 2007, became official and was welcomed into Syracuse with a formal ceremony on August 2nd of this year.  The “re-branding ceremony” revealed new street signs reading “Destiny USA Drive”, 26 new digital directories, and applauded the transformed mall and those who helped to create it.

Just weeks ago, construction crews wrapped up work on one of the mall’s newest additions, its Pedestrian Bridge, which now serves as the mall’s main entrance.  And for those familiar with the area, it is accessed off of Hiawatha Boulevard’s new parking lots, contributing to increased shopper convenience and facilitating traffic flow surrounding the mall.  An enormous project for construction crews throughout Syracuse, the pedestrian bridge is glass-enclosed, climate-controlled, and thus described as one of the most “iconic sections” of the newly-expanded mall.

Perhaps one of the biggest differences between what was formerly Carousel Mall and what is now Destiny USA is its overall “green” theme.  Most of the newly-renovated and just-built interior incorporates green and yellow “earthy” colors, giant indoor trees, and signs throughout the facility that explain the importance of being environmentally-friendly.  But what’s more – and ultimately makes a bigger impact – is that all of the construction equipment used to transform the mall was converted to 100 percent biofuel, a type of fuel derived from plant sources and that emits smaller amounts of greenhouse gases.  Furthermore, 95 percent of all construction waste was recycled, and several of the major worksites were paperless.  This was no easy task, as construction crews had to adapt to some of the newest technologies, but it was, however, a positive change, as local construction crews set a national example for sustainable construction with the creation of Destiny USA.

Already the sixth-largest shopping destination in the country, Destiny USA is projected to be the second-most visited shopping mall in the country, next to Mall of America in Bloomington, Minnesota.  And perhaps these statistics wouldn’t exist if not for the hard work and expertise of Central New York construction crews.  The creation of Destiny USA supplied more than 300 construction jobs to the Central New York area.

Additionally, it is estimated that the mall’s new stores will employ roughly 5,000 workers.