Do your people take their personal protection equipment for granted? PPE is a critically important tool on any type of construction jobsite. But just because it exists doesn’t mean your crew members are using their gear correctly. And when they don’t, that can actually create additional hazards on the jobsite rather than protecting people from harm.

Even a small oversight or mistake can have horrendous consequences. Consider this example:

Company XYZ’s policy requires their backhoe operators to wear a fall protection harness while in the cab operating the machine. An operator sees a fellow worker carrying a load of materials and, in an effort to be helpful, he leaps off the backhoe. As he does, a strap on his fall harness catches the control levers, which moves the loader bucket. The bucket crushes another worker against a wall, killing him.

This terrible accident could have easily been avoided.

The problem started with inappropriate use of PPE. Because it was used incorrectly, the backhoe operator’s personal protection equipment became a hazard, setting in motion the worst possible series of events. Further, leaping from a piece of equipment is never safe. And an investigation of this accident also revealed that the morning safety meeting that was held on this day did not cover topics pertinent to the day’s actual work activities. 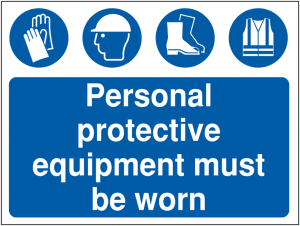 Let’s look at what should have been done to correctly use personal protective equipment and what other safety measures you should be using on a regular basis to augment your crew’s PPE. It all comes down to training.

1. Simply handing out gear isn’t enough. Each worker needs to be trained in how to use the equipment correctly. Period refreshers are a good idea, regardless whether your people are veterans or new on the job.

2. Remind your workers to always double-check themselves, to be sure they don’t have loose clothing, hair or other items that could become caught in machinery or – as in the case of the above example – entangled in the controls. Equipment such as a fall harness should be worn snugly, so no parts are hanging loose. Aside from the hazards posed by dangling straps, etc., the harness can’t do its job if it isn’t fastened securely.

3. The recommended exit procedure for construction equipment involves three-point contact holding the handrails and using the steps to dismount. This requires the operator to face the machine as he’s leaving the cab. Had the backhoe driver in our example above done that instead of leaping to the ground, he would have noticed his harness strap becoming tangled and could have pulled it away before it fatally moved the bucket control lever. Best practice is to shut down the machine before exiting, which also would have eliminated the risk that caused this accident.

4. Plan your morning toolbox talk around the work to be done that day, focusing on specific safety issues that might arise. Encourage each crew member to do a personal walk-around where they will be working, looking for potential hazards to people or equipment.

The only way for your people to stay safe on the job is for everyone to “think safety.” That includes using personal protective equipment correctly, so it reduces risk instead of adding to the hazards on your jobsite.