Spring has sprung, and summer is fast approaching which means more construction zones are going to be popping up all over. The U.S. Department of Transportation and the Federal Highway Administration present National Work Zone Awareness Week each spring, to highlight the dangers of work zones as well as motorist and worker safety. April 23-27 of this year is that week, the DOT will place work zone safety ribbon magnets on all DOT vehicles and run print, radio and outdoor ads in New York City as well as Albany to promote it. 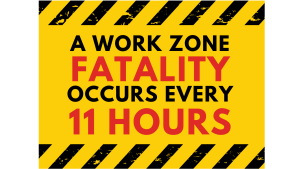 On average, around 600 work zone fatalities occur in the U.S. every year, and over four out of five work zone fatalities are motorists. The statistics go on and on, it’s simply astonishing. Some simple safety tips that everyone can follow to try and avoid any work zone accidents are to drive within the posted speed limits, dedicate full attention to the roadway, pay close attention to merge signs and be patient. New York State’s Department of Transportation’s Operation Hard Hat highlights ten safety tips that we all can, and should keep in mind this season.

In Michigan a person who is caught speeding more than 10 miles over the posted speed limit in a work zone and as a result causes death to a person working in a construction zone is guilty of a felony punishable by a fine of not more than $7,500 or by imprisonment of not more than 15 years or both. Being a careless driver within a work zone, can result in the felony penalties, it is no longer reserved for reckless or drunken drivers.

The danger does not come only from the drivers outside the work zone, but also from the construction vehicles within it.  Equipment World’s February 2008 edition of “Safety Watch” is entitled Hazards of the Road, and addresses both sides of the risks a construction worker must be mindful of.  Any given site could be filled with things like dump trucks, graders, compactors and pavers, and a worker must be aware of those things as well as the outside traffic simultaneously.

So when you’re traveling this spring and summer, be prepared for work zones by reviewing safety tips, being fully aware of your surroundings, and when you see those orange reflective barrels, slow down.  These frequent spots along your commute may seem like a nuisance, but keep in mind that workers are putting themselves at risk to repair the highways and bridges that we all drive on, making it safer for us — Let’s make it safer for them.