No construction project manager ever wants to think about their crew members getting injured on the job. But it can – and all too often does – happen. Highway zones are some of the most dangerous construction sites because the crew is at risk from motorists as well as all the usual worksite hazards.

The most recent statistics published by the US Department of Transportation Federal Highway Administration are from 2015, but they show a disturbing increase in work zone motorist-involved accidents. In that year:

No wonder contractors are upping their safety game

Of course, it’s no game. It’s serious business. No one is more aware of work zone safety issues than contraction companies, who pay the price not only in human terms but when they see their workers comp rates and other costs rise as a result of safety failures. But there are other reasons to renew – and boost – safety efforts: 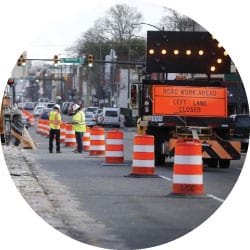 Construction employers have long used multiple means to train their people on safety. Technology now enables you to expand access to training, via web-based instruction, video-conference workshops, smartphone apps workers can access on the job or anywhere else, etc.

Because safety is so important, you have more partners to help with training, too, thanks to programs available through trade unions, industry associations, insurance companies, specialized consultants, and even manufacturers of personal protective equipment (PPE). But there’s more.

Perhaps even better, technology may one day soon be able to replace humans in the most dangerous positions. Removing people – primarily flaggers — from these areas is a surefire way to protect them from injury or death. And it frees up those people to perform other tasks instead, increasing overall jobsite productivity.

New technologies can cost more, but it’s an investment in human lives as well as greater productivity. That could be a pretty impressive payoff. And, until project designers come up with a way to entirely separate motorists from road project workers, technology improvements will continue to be one of the most effective ways to protect people and realize better safety records.